The medieval Door Bell introduces us into the heart of the ancient castle of Montemarciano, which still almost intact fourteenth floor plan. 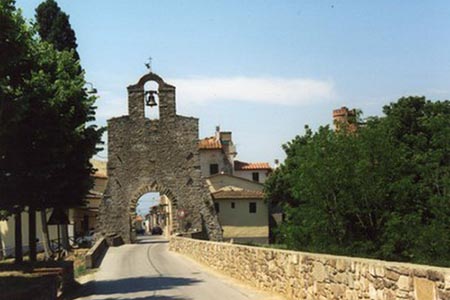 Even this small urban center is located on a spur of the “cone of Loro Ciuffenna“ in the midst of an area that was densely populated since antiquity and that was crossed by the great Roman road “Cassia Vetus” or “Clodia“; its name is clearly of Latin origin and may mean “Mount of Mars” or, more likely, “Monte Marcio” in reference to a family of landowners in the area belonging to the “gens march“.

A quarter mile from the door bell is the Oratory of Madonna delle Grazie; above the altar stands a beautiful fresco dated to the third decade of the fifteenth century, with the Enthroned Madonna and Child with Saints Michael and John the Baptist, initially attributed to Masaccio, and now attributed to Francesco d’Antonio.