Museum of the Basilica

The museum is located in the beautiful city of San giovanni valdarno and is housed in the premises adjacent to the Basilica of Santa Maria delle Grazie, a sanctuary that was set up when the miracle occurred in 1479 at an elderly woman named Mona Tancia, which succeeded thanks to his prayers to the Virgin, to breastfeed nephew of three months, orphaned parents because of the plague. The church was bombed during the Second World War, it was destroyed in the great chapel at the end of the nave, which was replaced with a large dome, recently restored. The interest and the uniqueness of the church, which is accessed by a double staircase, is also linked to the fact of being kind at the ancient walls of Castel San Giovanni, and in particular above the port of San Lorenzo, where the sacred image of Mary. The door is still visible today, as incorporated in the attic of the church.

The collection is made up of a significant nucleus of paintings of the Florentine ‘400 with works by Giovanni di Ser Giovanni called Scheggia, Masaccio’s brother, by Mariotto di Cristofano, John of Piamonte, a pupil of Piero della Francesca, Domenico di Michelino and James the Saddler and especially the masterpiece Annunciation by Fra Angelico. There are also some seventeenth-century works, that were exposed in the new exhibition (2005), in which have found a place also unusual materials like precious silverware and a valuable collection of  books and a fresco by Giovanni da San Giovanni.
Note in particular: Fra Angelico, Annunciation from the monastery of Monte Carlo, 1430-1432; Giovanni di Ser Giovanni known as Lo Scheggia, Madonna and Child Enthroned, 1440-1450; Giovanni di Piamonte, Archangel Raphael and Tobias, 1467-1470; Jacopo of Saddler, Annunciation, 1472; Giovanni da San Giovanni, Beheading of the Baptist, 1620. 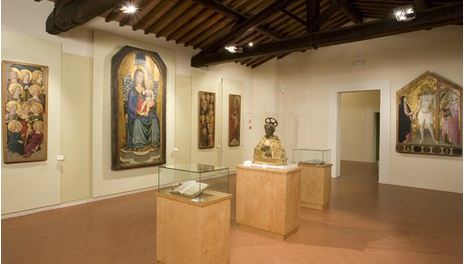 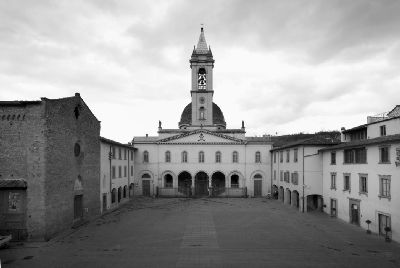