The Arboretum, (it is defined as a particular botanical garden in which they collect, instead of herbaceous specimens, of the arboreal individuals) was born in 1846 as a Park next to the Abbey of Prataglia, purchased in a personal capacity by the Lorraine and transformed into Villa-Fattoria. Soon the Bohemian Forest Inspector Karl Siemon, called by the Grand Duke to manage the Royal Casentino Forest in 1835, transform and expand the park to use it as a plant of acclimatization and experimentation of exotic species to be used in the reforestation that were then carried out throughout the Casentino-Romagnolo ridge.

In the premises of the ancient Villa-Fattoria dei Lorena, right next to the Arboretum and the Forest Barracks, the State Forestry Corps has created in 1985 an interesting forest museum, completely reorganized and expanded in recent years. In it visitors will find thematic rooms with information on the flora, fauna and history of forestry work in the Casentino forests. In addition to the Siemoni Arboretum, the State Forestry Corps has also created, in Badia Prataglia, a small plant for the ex-situ conservation (that is, out of their natural environment) of some particularly rare Italian forest species such as Abies nebrodensis (fir endemic to Sicily, whose world population consists of only 24 specimens), Pinus leucodermis (the very rare loricate pine present only on the Pollen in Basilicata) and Acer lobelii (a maple present only in a small portion of the Campania Apennines. 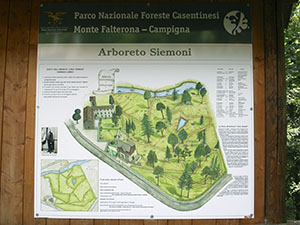